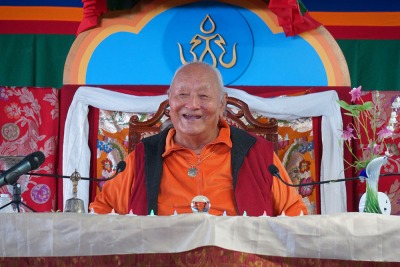 Chögyal Namkhai Norbu was born in Kham, eastern Tibet, in 1938. He was recognized at an early age, a common practice in Tibetan Buddhism, as the reincarnation of a great Dzogchen teacher Adzom Drukpa (1842-1924) and of Shabdrun Ngawang Namgyel (1594-1651), the founder and spiritual leader of Bhutan. At the age of sixteen he met Master Rigdzin Changchub Dorje, who introduced him to the authentic knowledge of Dzogchen.

In 1960, Chögyal Namkhai Norbu came to Italy at the invitation of Professor Giuseppe Tucci as a staff member of the Institute for Middle and Far Eastern Studies of Rome (today ISIAO). He was the Professor of Tibetan and Mongolian Language and Literature at the Oriental Institute of the University of Naples from 1964 to 1992. Chögyal Namkhai Norbu was recognized as a leading scholar on Tibetan civilization, particularly in the fields of history, literature, and the medical and astrological sciences.

In 1976, Chögyal Namkhai Norbu began teaching Dzogchen to a small group of practitioners in Italy. As the interest in his teachings grew, he dedicated himself to spreading Dzogchen and establishing Gars and Lings of the International Dzogchen Community (IDC) throughout the world - in numerous countries including Italy, Spain, Russia, China, Poland, Czech Republic, Australia, Argentina, Germany, and the UK. The North American seat is called Tsegyalgar East, and it is located in Conway, Massachusetts, where he gave his first East Coast teaching in 1982. In nearby Buckland, he also established Khandroling in 1989. This sacred land offers practitioners retreat cabins, a stupa and the world’s first Universal Mandala for Vajra Dance.

Chögyal Namkhai Norbu was widely known for his activities on behalf of the culture and people of Tibet. In 1988, he founded an NGO called A.S.I.A. (Association for International Solidarity in Asia), which operates primarily in the Himalayan region, and is dedicated to serving the Tibetan people in the sectors of education, health, training, disaster relief, and sustainable economic development. The following year he also founded the International Shang Shung Institute, a nonprofit dedicated to the preservation of Tibetan heritage and culture.  Additionally, Chögyal Namkhai Norbu established the Shang Shung Institute School of Tibetan Medicine with its main seat in Conway, under the directorship of Menpa Phuntsog Wangmo.

In 2017, Chögyal Namkhai Norbu founded the Ati Yoga Foundation, which was created with the intention to support all activities related to his legacy and to act as an umbrella for all the organizations in the International Dzogchen Community.

Chögyal Namkhai Norbu, one of the greatest living Dzogchen teachers, passed away peacefully at his home in Tuscany, Italy, on September 27, 2018 at the age of 80.