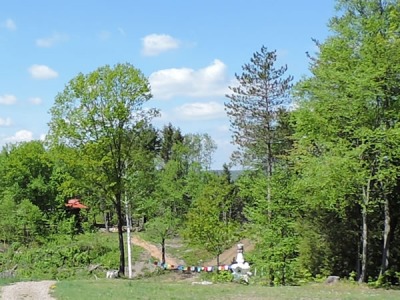 With Rinpoche’s strong encouragement, in 1989 Tsegyalgar East purchased 220 acres in the town of Buckland, Massachusetts. The name Buckland refers to the abundant deer (or “bucks”) the English settlers found when they came to live in the remote winter hunting grounds of the Pocumtuck Indians.

Rinpoche urged the purchase of this land, which he sensed to be a “quite special place.” In fact, the hill that Khandroling occupies (1611 ft altitude) is known as Mary Lyon Mountain, named for renowned educator Mary Lyon, born here in 1797.  Impoverished at age five upon the death of her father, as a school child Mary Lyon was soon recognized for her prodigious mind and exceptional energy, and was supported by townsfolk in her relentless pursuit of knowledge. At age seventeen, she was running a training school for girls out of the home of her benefactor in Buckland. A lifelong champion of education for girls and women, she went on to found the first institution of higher learning for women, Mt Holyoke Seminary, in 1837 (later Mt Holyoke College),. Mt Holyoke’s admission standards equaled those of Harvard and Yale; it offered the first opportunity for women to pursue a full course of study in the arts and sciences, and it was affordable for young women of modest means. From the beginning, Mt Holyoke graduates went on to establish new schools in the American west and around the world. Today on a parcel of land between Lower Khandroling and Upper Khandroling, the college maintains the birthplace of Mary Lyon as a small park. The park is accessible from the Khandroling parking lot.

In a reminiscence of her childhood on the mountain, Mary Lyon wrote that it was a “wild, romantic farm; made, one would think, more to feast the soul than to feed the body.”

About the site of the Vajra Hall today, Mary Lyon wrote:

"…just beyond the precincts of the family domain was the 'top of the hill,' crowned with its high rolling rock, ever inviting the enterprise of each aspiring heart. Everyone was amply repaid who would climb that steep hill, and ascend that high rock."

Khandroling consists of two parcels. The smaller, lower parcel, called “Lower Khandroling” has a farmhouse and an old barn on East Buckland Road, and a few acres of sunny garden, meadow, and pasture land. Tsegyalgar purchased the parcel in 2002. The community renovated the farmhouse to be Rinpoche’s dwelling when he is here, and has begun to use the land experimentally for agricultural crops. In 2014 the community completed construction of a new road to connect Lower Khandroling to the larger parcel, Upper Khandroling, which was previously accessible only by an old logging road through miles of heavily forested terrain.

From the parking lot at the base of Upper Khandroling, the rough road rises steeply to a terrace with a grassy meadow and a swimming pond. The old pasture pond was improved for use in forest fire management by the Civilian Conservation Crops during The Great Depression of the 1930’s. Here the community has its camp kitchen, picnic tables, and a dance platform. The community’s first project on the land was to build Rinpoche’s cabin, on a site he chose overlooking the pond.

The road continues uphill to the summit. The community improved this steep section in 2015, widening it and installing culverts and drainage ditches to control the run-off of rain and melting snow. It never was a proper road before; previously only 4-wheel drive vehicles could make the steep ascent.

In 2013, the community undertook a project to clear 16 acres of forest, which opened up a wide and sunny southern exposure and a view from the summit to the pond. The logging was accomplished with a grant from the state of Massachusetts. It will restore biodiversity to the mountainside, to replace the scrub forest that had gradually overtaken abandoned farmland. In 2015, the community cleared debris from the logging operation and cut a path up the newly cleared hillside, so that walkers can hike directly from the pond to the summit, away from cars on the new road.

Not far below the summit is the Victorious Stupa. The community worked on the project over five summers in the mid-1990s, dedicating the work and the Stupa itself to Rinpoche’s health and longevity. It is built of concrete, brick, and stone. Its central axis, the Sog Shing “life stick” was cut from a straight cedar tree on the land. The Sun and Moon are cast bronze, gold plated. The Stupa is a representation of the body, speech, and mind of the Buddhist path, and a receptacle for offerings. Among the offerings in this Stupa are small tokens from nature from all the places on earth where Rinpoche had taught up until that time.

At the summit, the Vajra Hall greets you with a staircase at the western gate made of Goshen stone, a beautifully variegated mica schist that was quarried in this vicinity.